~ Fabric – sturdy, not too stretchy, also perhaps one that doesn’t pill with time/use
– don’t have access to fabric right now or the extra $ – how about an old sheet – zero dollars – or an old blanket (not too thick as to make sewing hard)??
~ Stuffing – purchase a chunk of foam from a craft store, or one-the-cheap; sacrifice an old couch cushion, or also on-the-cheap; old towels folded to fit inside
Not recommended: regular bags of craft stuffing, it just won’t hold up and your bolster will just sink to the floor when you put your weight on it. You would have to stuff it tight tight tight to make that work – 10+ bags of stuffing?
~ Optional – zipper (to be able to remove innards and either replace them or wash the cover)
– zippers can get pricey, a sturdy one is best, so another on-the-cheap; do you have an old coat or something like that that you can scam a zipper from? Maybe that couch cushion you scrificed??? 😉
note – Just make sure the zipper is long enough where you are easily able to get your stuffing in or out
~ and of course, Sewing machine, scissors, thread, pins…….

Decide on a size:

Do you want seams down all four sides? Or just one seam?
Four Seams:
Many of the patterns available piece out the material for you to make your ”box”
for instance a 20 inch bolster would require 4 pieces of material for the length plus the two end caps so;
two pieces of 6” x 20”
two pieces of 12” x 20”
two pieces of 6” x 12”
One Seam:
You have to have at least one seam of course
You probably will not want it on either of the sides you are going to lay on so it will need to be positioned on the side of the bolster

If it were me, even if I were doing 4 seams – I would still want the zipper on the side.
Easy step – just put it in one of the 4 seams
Hard way – one of the long sides gets split into two with a zipper installed in the middle of it
Creative way – a flexible zipper around three sides of one of the end caps (so 24” zipper)
Installing a zipper – if you have never done one, it’s not hard, but google it, so you can see how.

Bolster with 4 Seams:
If you are adding a zipper, tackle that first, use one of the long 6” pieces and a long 12” piece (this way your zipper will be in a side seam).
If you’ve never done a zipper you may want to do a light hand stitch first to make sure you have it where you need it.
Zipper or no zipper, have your two pieces of material face to face and sew down the sides a half an inch in from the edge of the fabric.
Pin the other two sides to form your “box” (also face to face, so it is totally inside out) and sew the rest of the seams in the same fashion.
Unzip the zipper a few inches so it is easier to turn it inside out after the next step.
While your bolster is still inside out, pin the two end caps on (also inside out).
Note: if you are not installing a zipper on your bolster you will need to leave one end open enough to stuff it and then stitch closed by hand after.
Sew around the edges of each end – again, one half inch in, until your “box” is complete.
Using the “hole” where you left the zipper open, turn the whole thing right side out, unzip it completely and stuff it with your choice or stuffing.

Bolster with 1 Seam:
Using the large 21 x 37 piece, line up the 21” edges so that the material is inside out.
Zipper? Pin it into that seam and sew away!
No Zipper? Sew down the entire seam – a half an inch from the edge.
Unzip the zipper a few inches so it is easier to turn it inside out after the next step.
While your bolster is still inside out, pin the two end caps on (also inside out).
Note: again, if you are not installing a zipper on your bolster you will need to leave one end open enough to stuff it and then stitch closed by hand after.
Sew around the edges of each end – again, one half inch in, until your “box” is complete.
One note when sewing the caps on the “no seam” bolster – you kind of have to round the corners of the end of the “box” while you are sewing. Just trim off the excess eam material after.
Using the “hole” where you left the zipper open, turn the whole thing right side out, unzip it completely and stuff it with your choice or stuffing.

This should be at the beginning of the instructions, but it’s not necessary to have, it just makes it look traditional.
If you wanted to have a handle on one end you will need a piece of material 5” x 7”
Five inches because you are going to fold it in half, material inside out, and sew the side that is 7” long down the side a half an inch in.
Turn it right side out and you now have a two inch wide handle 7” long – that extra inch is to sew into the seams of the end caps – a half an inch on each end.
The handle would need to be installed while you are sewing on your end caps.
If you went the “no zipper” route then it should probably go on the end that will not be hand-stitched so that it has a more secure hold from the sewing machine stitching.
Otherwise, pick either end, pin it inside your box when you pin on your end caps. You are pinning it on the 12” sides of your “box” – so one end of the 7” piece goes in the middle of the 12” side and the other end of the 7” piece goes in the middle of your other 12” side.

Alternatives: Instead of matching material, an old belt, or strap? Just make sure your sewing machine and needle can handle the thickness.

I help individuals as well as groups develop a yoga practice that is suitable for each body.  I take the time to understand particular needs, finding appropriate modifications and challenges, so that everyone is able to understand how yoga can help them specifically.

We're not around right now. But you can send us an email and we'll get back to you, asap. 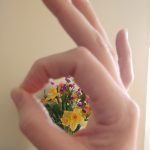